According to Pfizer vaccine data as of August 14, 13 deaths have been reported in minors in Europe, with vaccination having barely begun. Six deaths in infants and unborn children have been reported: four of them are suspected to have been due to transplacental contact with the vaccine (in pregnant women who have been vaccinated). In another case, the suspicion is because the infant would have been exposed to the vaccine through breastfeeding.

In ages 12-17, 7 deaths have been reported, 6 boys and 1 girl. In two cases, cardiac arrest was reported. In two others, cardiomegaly, an abnormal enlargement of the heart, which is a manifestation of cardiomyopathy. Other causes of death indicated in these cases are thrombosis, sudden death, pulmonary embolism. In another case, there is a combination of factors of factors, headache, hypersomnia, loss of appetite, lethargy, fatigue, abnormal sensation, and finally suicide.

These are the data extracted from the European pharmacovigilance website EudraVigilance, arranged in a spreadsheet: 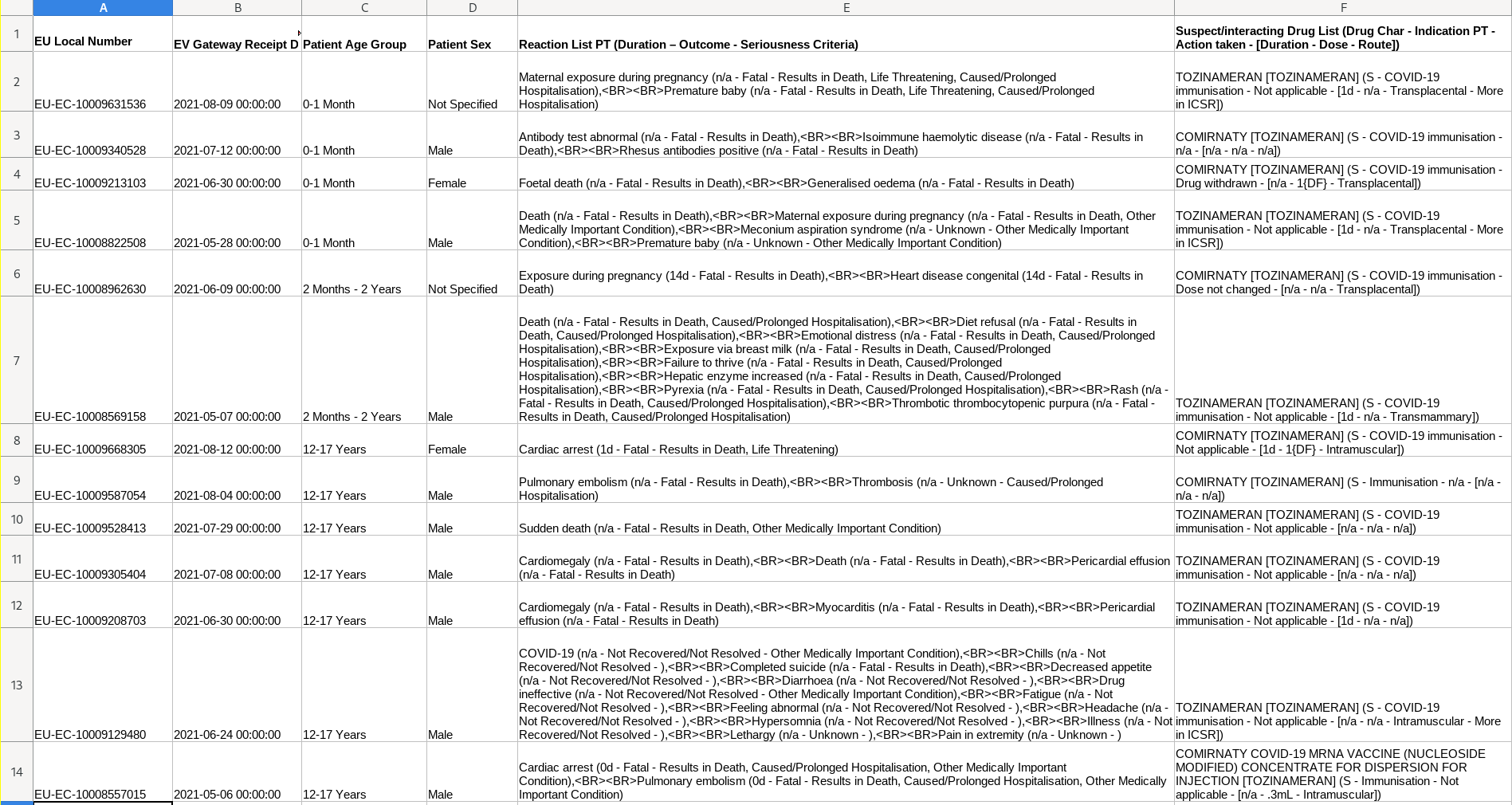 How to Consult EudraVigilance

Pharmacovigilance is the mechanism by which adverse effects following the administration of a medicinal product are monitored. In Europe, the official body responsible for this monitoring is EudraVigilance. The consultation of EudraVigilance data (as well as the reporting itself) can be unintuitive.

The notifications received do not mean that they are caused by the medicine. They serve to reflect harm that has occurred shortly after administration. The agencies analyse the reports received and study them. In the case of these covid vaccines, however, the reports received are extraordinarily high compared to those received for other vaccines or medicines. In the US, more notifications have been received in 8 months than in 30 years for all vaccines combined.

Also, it is important to note that underreporting of these systems is well known, as we have noted in the report. Depending on the study, it is estimated that between 1% and 10% of all adverse events are reported. It is important to bear this in mind when reading the data. Knowing that while they may not be all there are, they are not all there are.

We believe it is informative to view these data in person. Below is a guide on how to access this information along with some graphs that we feel are important.

How to consult the notifications received in EudraVigilance?

1.- Go to www.adrreports.eu/en/search_subst.html. You will see a disclaimer that you have to accept:

2.- Confirming that the tab "Suspected adverse reaction reports for substances" has a white background, click on the "C": 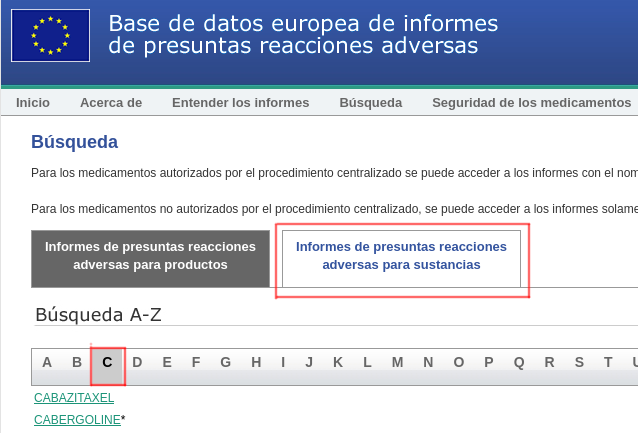 And we search for the "COVID" vaccine we want to consult: 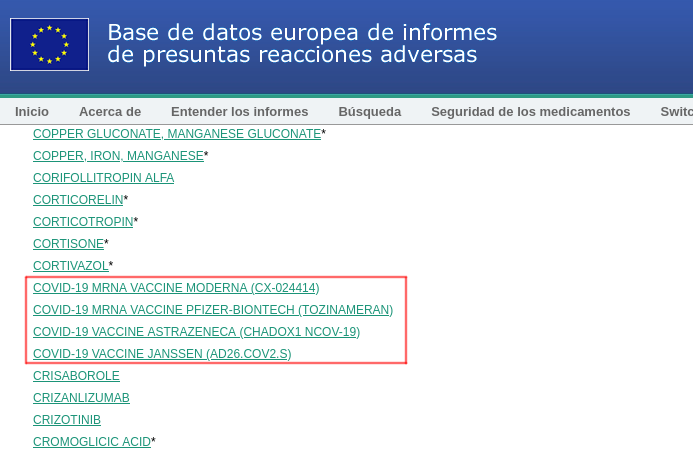 3.- Select "COVID-19 MRNA VACCINE VACCINE PFIZER-BIONTECH (TOZINAMERAN)" if we want to see the notifications of the vaccine intended for administration to minors.
Once we have logged in, we have several tabs with different displays. In the first tab, "Number of Individual Cases", in the first graph we can see the cases notified according to age group. We can see that for the Pfizer vaccine, 356,457 notifications have been received as of 14 August, of which 2,144 refer to vaccinations between 12 and 17 years of age:

4.- In other tabs we access to other visualisations. For example, this is the graph of notifications divided into serious and non-serious according to groups of conditions. For example, we can see that as of 14 August, 61,614 serious reactions related to the nervous system have been reported: 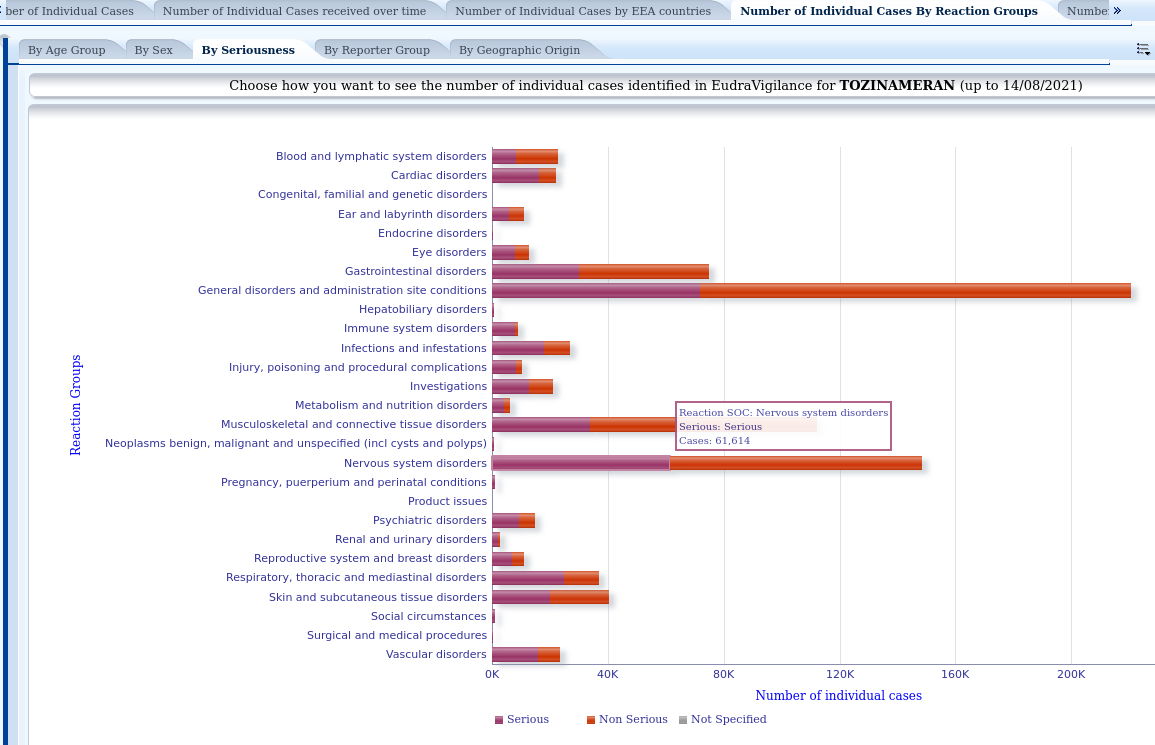 5.- Under Number of Individual Cases for a selected Reaction, the number of notifications by condition is shown. For example, under Cardiac disorders, you can see the number of cases reported for the reaction Angina pectoris.

In the last graph, you can consult the information on Outcomes, or outcomes of the condition:

In order to know the total number of deaths registered after the administration of these drugs through the graphs offered, it is necessary to calculate the total number manually, consulting each of the general categories and adding them up. This is a rather laborious task and is not provided by the website itself.
In this image it can be seen that for the group called: Cardiac disorders, 614 deaths have been reported after injection of this drug.

6.- If we want to make a more detailed analysis, being able to access the mortality data in a less laborious way than in the explanation of the previous point, but needing more technical skills, in the last tab, "Line Listing", we can download the data of this vaccine in csv or excel format. For example, I download the data with a filtering that only includes ages 0 months to 17 years by selecting these ages in the Age Groups drop-down. If I don't select anything, it will download all the available data:

And click on "Run Line Listing Report" to generate the listing.
Once generated, at the bottom left, click on "Export" and, on "Data", choose the download format you prefer (Excel, CSV, Tab Separated, or XML). This will generate and download the file with all the data that we can then analyse in a spreadsheet or with the software of our choice, or put into a database:

According to Pfizer vaccine data as of 14 August, 13 child deaths have been reported in Europe, with vaccination having barely begun. Six deaths in infants have been reported: four of them are suspected to have been due to transplacental contact with the vaccine (in pregnant women who have been vaccinated). In another case, the suspicion is that the infant was exposed to the vaccine through breastfeeding.

In ages 12-17, 7 deaths have been reported, 6 boys and 1 girl. In two cases, cardiac arrest was reported. In two others, cardiomegaly, an abnormal enlargement of the heart, which is a manifestation of cardiomyopathy. Other causes of death indicated in these cases are thrombosis, sudden death, pulmonary embolism. In other cases there is a combination of factors, headache, hypersomnia, loss of appetite, lethargy, fatigue, abnormal sensation, and finally suicide.

This is the data laid out in a spreadsheet:

The data is presented in a spreadsheet.

How to consult VAERS

VAERS is the US pharmacovigilance system. A summary of reporting is available at openvaers.com. OpenVaers imports the official data and displays it in a synthesised and accessible form. The data can be consulted directly on the official website, https://vaers.hhs.gov/data.html.

NOTE: In the coming days, we will develop this section with more information on how to consult VAERS.